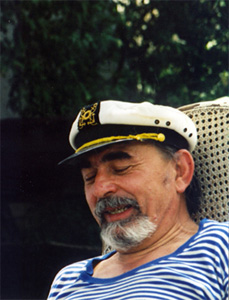 I was born on 14th of Aug. 1941 at Pesterzsebet (suburb of Budapest), in the middle of a Petit Bourgeois (philistine) family. The next important date of my life was 1972, the birth of my elder son, Zsolt, and 1974, the younger son, Marton. Nor before neither after nothing interesting happened to me.

Attila Tibold amateur graphologist has stated the followings about my character (so I have one!):
"You are reticent and make friends difficultly. If you became opened (sic!) and you accept somebody as your friend, you like sincerely. You wait for the other's move, and you refuse or not... When somebody hurts you, you never forget it.." Ipse dixit.

That's all about my intellectuel. More than this is pomposity.

My material is more significant. My leucocyte 3400, lymphocyta 26, curved 58. On the protuberantian occipitalis externa is huge sorny exostosis, and the lordosis of cervical vertebra came to an end. (an anticarrierist spine!)

After my polyp-operation, I still was able to disturb silence with my whispering voice too. I confess more only to my priest or doctor.

Zoltan Ven, graphic artist, was born in Pesterzsebet, Hungary, in 1941. After finishing his schooling, he worked at the Department of Treasury as a designer. After that, leading the workshops of the state run puppet theater for five years, he dedicated himself exclusively to the graphic arts. He is known as an Ex libris artist all over Europe.

In 1976 he made his first intaglio printing for the public. He received his first aeard for small graphic art in the same year. Since then he received 18 diverse awards at competitions in various European and overseas countries. His name is included in the fifth volume of "The Ex Libris Artists" published by the International Federation of Societes of Ex Libris. The volume contains 6 original engravings by Zoltan ven.

The artist has around 300 pieces of small graphic art works so far. 80% are copper engravings (C2), the rest are etchings (C3), aquatint (C5), soft-ground etchings (C6), and lino cuts (X3). His plates are commissioned by famous collectors from almost every European country. Zoltan Ven can be called most succesful ambassador of Hungarian ex libris art with good reason.

His work represents every aspect of European culture, Hungarian history, mythology and folklore, also good and bad human traits - sometimes in a mocking fashion. He also illustrates significant events of our age in an individual way.

his work shows a completely individualistic style in the area of the small graphic art. His works are greatly regarded by collectors and we admire his art with awe.